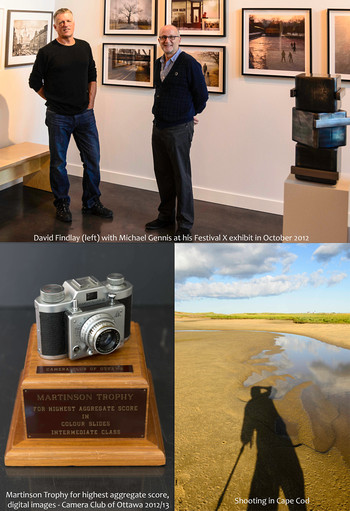 David A. Findlay is based in Ottawa, Canada, and specializes in urban and natural landscape photography. Trained as an urban planner, he has developed special interest in the presence of nature in crowded urban settings and the escape it provides.

“Like many people, I have a close attachment to the calming and restorative power of natural environments and many of my photographs illustrate this. As the planet urbanizes and our lives become increasingly stressful and disjointed, it is important to preserve our ability to escape to some form of natural setting. Providing for and finding this sort of refuge in our urban places is essential. Easy access to parks, waterways or bikeways can keep us sane!”

Travel photography is another passion and David has shot in places as diverse as Costa Rica, Tunisia and the Aeolian Islands. One of his favourite places to photograph is Cape Cod, Massachusetts, in the United States.

“I started vacationing in the Cape with my family as a boy and have returned every year for over 50 years. The light is very special there and I can return to photograph the same scene over and over. Landscape and light have a relationship like a jazz standard in the hands of a master musician. An artist is able to reinterpret a familiar song as a refreshing new experience, and variations in light can do the same for scenery.”

In 2019, David achieved Grand Master status and an honourary lifetime membership at one of Canada's oldest photography clubs, the Camera Club of Ottawa (est. 1894). His work has earned numerous awards at this club including,